As the kid who once hand made everyone’s Christmas gifts, it’s only natural that Christy Ward’s passion for creating and making things by hand would spill into her adult life.

What started as Christy’s way to make her own jewelry, friends, family, and even strangers on the street would comment on her designs. One day, a stranger was so interested in a piece that Christy was wearing that they offered to buy it from her on the spot. After literally selling a piece off her neck, the proverbial light bulb went off and Christy began designing jewelry and accessories before launching Robinson Lane Designs in 2002.

Robinson Lane was no overnight success though. Christy worked a full-time job while growing the business on nights and weekends—pulling all-nighters in the process—for two years before she felt ready to go all-in. To get through those early days, Christy gave herself six months to make it work. Those six months of hard work paid off and her first large wholesale order from a regional retailer came in shortly after, giving Christy the validation she needed to know she was on the right path.

Christy’s lifelong commitment to the handmade brought led her to a 30-day immersion trip with Bridge2Rwanda in 2011. While on the ground, she met with community leaders and worked side-by-side with several women’s co-ops making beads. “Being in a foreign country with a major language barrier was initially very intimidating,” Christy says. “But when one of the women asked me to help her make some of the beads and brought me in, it felt like all the walls came down.” The kinship in creating something together, hearing these women’s stories, and helping them provide for their family was a life-changing and inspiring experience that has carried through to today, where she’s included paper beads in her own designs. 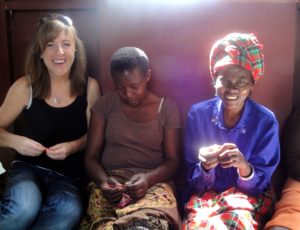 As years have progressed, Christy has found joy in working with people and designing custom pieces for each person. “I love hearing people’s stories,” she says. “Everyone has something that is meaningful to them—whether it be a lyric, phrase, or somewhere they’ve been. I love making pieces that are important to the person wearing them.” Christy’s hand-stamped pieces are created on demand at local fairs and craft shows, so her customers can actually see their designs come together right in front of them. 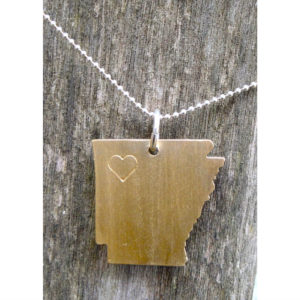 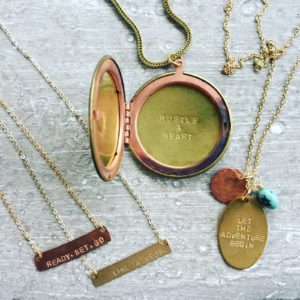 Christy challenges would-be entrepreneurs to never give up, “I’m of the belief that if you have a dream or idea or passion, you should try to make it work at all costs. Don’t write them off or be afraid – pursue them,” she says. She also encourages individuals to seek out resources wherever possible. Christy mentions the support and a strong knowledge base of the Small Business Administration as a huge factor in her success. “The biggest challenge for me was understanding and accepting my own limitations – you can’t be afraid to ask for help or seek out support.”

Christy has plans to expand in to new lines in the future and wants to continue focusing on the moments and memories that are special to her customers in her designs. You can stay up to date with what Christy is up to by following her on Instagram.

All images supplied by Robinson Lane.